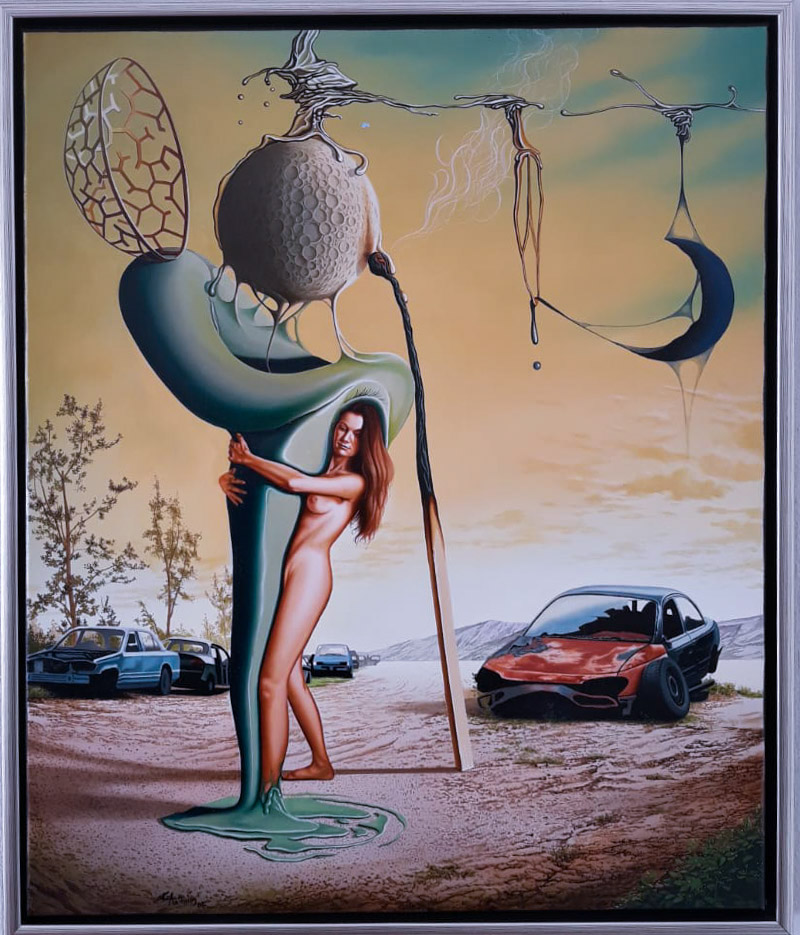 This typical example of magic/marvelous realism is as Antonius explains a storie without words. Images, meticulously painted, searching for answers. Dimensions are mutated and shaped to take forms which only excist in dreams. The sense and nonsense as in the meaning of life are thoroughly stirred to result in questions.

Ruud Antonius was born 3 Dec. 1959 in Apeldoorn, The Netherlands. He lived there until the age of 13 and moved to England with his family in 1973. There he went to school and studied art. In 1979 he left England and moved to the town Bielefeld Germany for 9 months, after that he moved to Hameln Germany and painted and played music there for 5 years. In 1984 he returned to The Netherlands. In 2009 he went back to live in Fleet, England and in 2011 he moved to Spain. And later settled in England again where he is currently living.

About his work
‘The works of Antonius are stories without words. Pictures, meticulously, looking for answers. Dimensions are mutated and shaped to take on forms that exist only in dreams. The sense and nonsense as in the meaning of life are thoroughly stirred to lead to questions. That’s essentially what it’s all about, creating tension by using recognizable photographically painted objects, figures and landscapes that come together in one frame to speak an unintelligible language, yet leave a sense of cohesion. A sense of recognition. Something remembered, almost forgotten but still there. The suggestion that materials are not what they seem after manipulation, transformation and deformation.
Beauty is not in the object, beauty is in the mind of the beholder. That is why observation plays such an important role. The question he asks is: “Does his feeling match the overall picture he uses?”. The original feeling will be exposed to associative images to complement its story. In this way it twists and weaves until it is satisfied with the result.
For him, open-ended stories are the best. There should still be questions to ask. Anthony does not have all the answers. He simply tells what he suspects. Working on his paintings is exciting and gives him energy. Just like you are in love. A fantastic state of mind to live with. But also very vulnerable. ‘

This work is in perfect condition and comes from a gallery. The work is delivered complete in a frame.