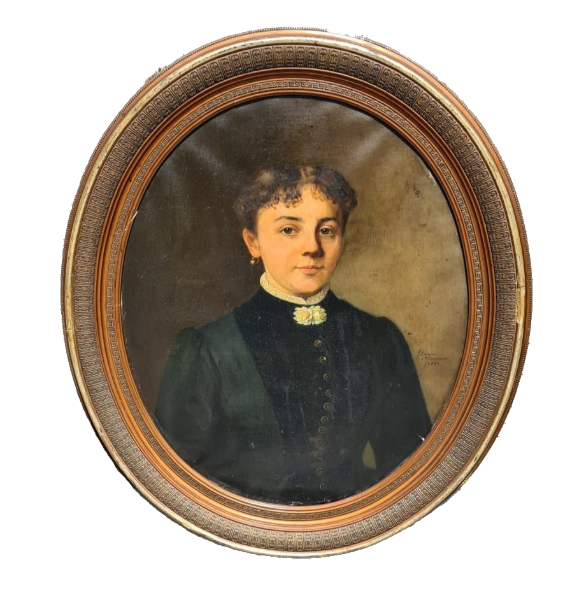 Signed and dated at the center right. The signature is also branded in the wooden stretcher frame. The work is in good condition an is framed in the original oval frame.

Clasina Carolina Frederica (Clasine) Neuman was born in 1851 at the Bloemgracht Amsterdam as the daughter of the painter Johan Heinrich Neuman and Aletta Catharina Petronella Elisabeth Theunisz. She learned the rudiments of the trade from her father and was further educated at the Rijksnormaalschool for Teekenonderwijsers in Amsterdam. She painted and drew still lifes, genre scenes and portraits, including one of her father.
Neuman lived and worked in Amsterdam until she moved to The Hague in 1891. She was a member of Arti et Amicitiae and the Art Love Society. Three times she failed to pass the balloting of the Pulchri Studio, after which her father wrote an angry letter to the board at the beginning of 1895. He suggested that the gentlemen might be afraid of women’s competition. It did not help. Neuman exhibited at various exhibitions of Living Masters and the National Exhibition of Women’s Labor 1898. In 1901 she took second place at an art exhibition in Paris. Her work is included in the collections of the Artmuseum The Hague and the Frans Hals Museum.

The painter died in 1908 in The Hague, at the age of 57. A year later, the work that had been left in her studio was auctioned at the Haagse Kunstkring.