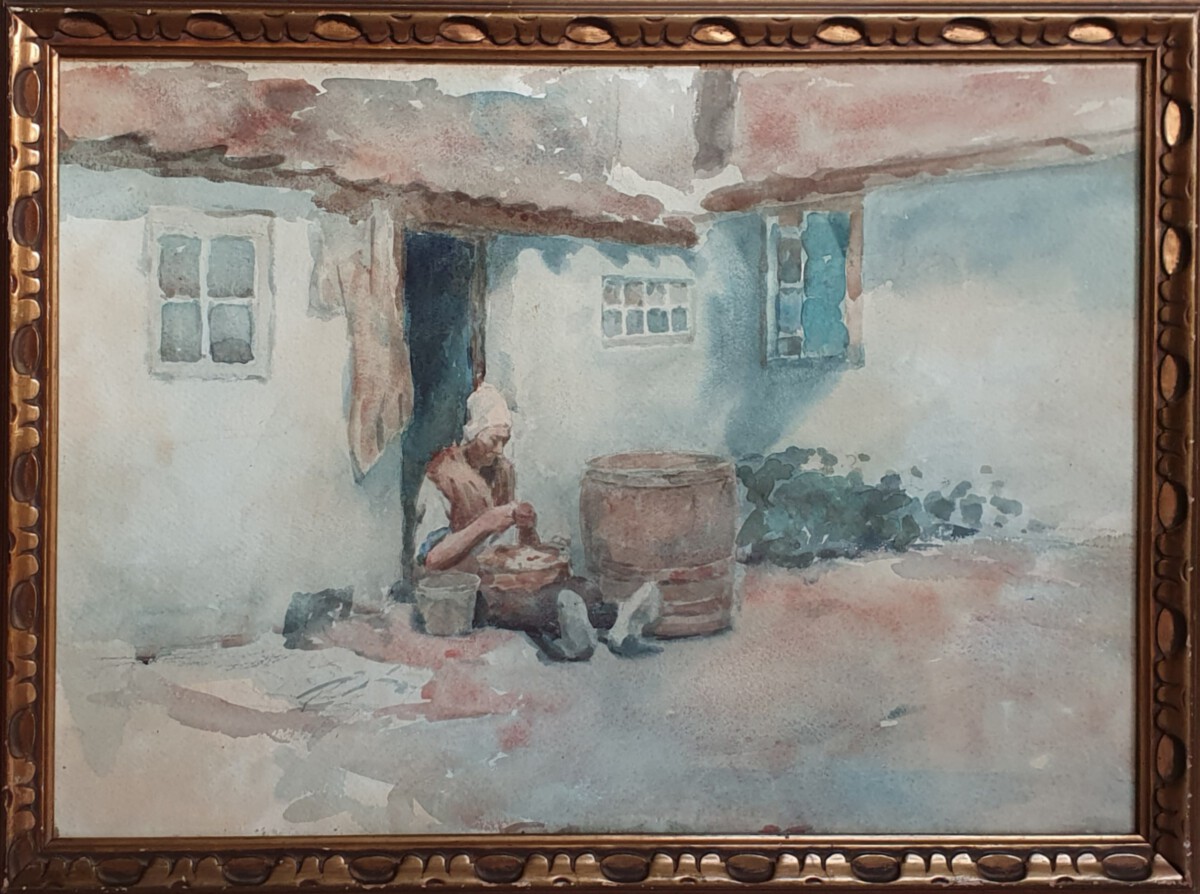 Known for its landscapes and interiors. Later in his oeuvre, more and more light entered his paintings: he surrounded his firmly set scenes with a sunny atmosphere. His paintings were very popular with the public and were often sold directly from the easel to America.

Pieters was born into a poor family and at a young age he was a house painters apprentice. At the age of nineteen he went to Antwerp in the hope of building a better life there as an apprentice decorator. He visited the evening drawing classes at the Royal Academy of Fine Arts of Antwerp with Charles Verlat and practiced hard drawing from

plaster models. In his spare time he painted from pictures and engravings. In 1885 he joined the traditional painters’ association Als Ik Kan. Later he was apprenticed to the Belgian landscape painter Theodoor Verstraete.

In 1885 Pieters had success for the first time with the painting “Rest time of the woodcutters”, which he had submitted to the Dutch section of the world exhibition in Antwerp. From that time on, he would focus entirely on painting. He continued to work in Belgium for quite some time and in 1894 he won the second class medal at the second world exhibition in Antwerp with the painting “Cornfield in Flanders”. He was awarded a gold medal at the Paris Salon in 1896 for this same canvas. He married Marie van de Bossche with whom he stayed for some time in Paris and Barbizon. In his early period he mainly painted still lifes and landscapes in a style that was related to the old Dutch masters. The sale of these went well and this resulted in regular orders.
In 1895 Pieters withdrew to the Netherlands and in 1897 at the age of 41 he settled in Blaricum. The picturesque nature of the Gooi, the small farms and the simple farming population inspired him to paint farm interiors and intimate farmyards. Initially, however, he found little recognition in his homeland and he was refused membership of the Pulchri Studio in The Hague. “Den Vlaeming” was not recognized among the Hague painters. Pieters was known for his bohemian-like way of life and traveled regularly through the Netherlands, especially Volendam drawing his attention. He now increasingly painted interiors with figures, with which he was especially successful in America. He had even furnished a peasant interior in his studio to meet the high demand.

Shortly after the turn of the century, Pieters spent some time in Italy to recover from an operation. From that time on, his work becomes lighter and clearer. More and more often, flowers also appear in his work. He also made portraits in an impressionistic style. In 1905 he moved to Katwijk aan Zee, where he made a large number of beach scenes, often with shell fishermen and horses. Shortly afterwards he settled in Laren and lived there until his death in 1932. Here too he would again mainly paint Gooise interiors, but this time lighter than in his Blaricum period.

Pieters died in 1932 during a taxi ride from Baarn to Laren, aged 77. His work can be found in the Royal Museum of Fine Arts in Antwerp, the town hall of Brasschaat, the Frans Hals Museum in Haarlem, the Goois Museum in Hilversum, the Singer Museum in Laren and museums in Barcelona and Toledo.